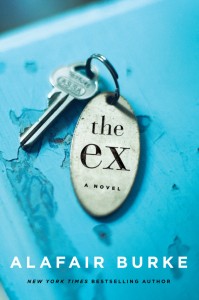 I have known Alafair Burke for more than 10 years, and she is one of my favorite interviews, and favorite crime writers.

Her latest novel is The Ex, and here is her description of the book:

Everyone has an ex. Correction: not an ex. The ex, the one you find yourself thinking about during the most unlikely moments. For some, the ex is the great love who got away. Or the one who made it hard to trust again. Or the one who makes you feel ashamed.

For Olivia Randall, the ex is her former fiancé, Jack Harris. A tragic decision she made twenty years earlier didn’t just break their engagement; it led to disastrous consequences she tries not to think about. But Jack re-enters her life in a big, surprising way when his young daughter calls her for help. Jack’s been arrested for a triple homicide. Olivia is one of the best criminal defense attorneys in New York City and knows Jack could not have committed the terrible acts he’s accused of.

For Olivia, helping Jack is a way to turn back the clock and try to absolve herself of two decades of guilt. But as the evidence against her client mounts, she wonders whether her memories of Jack and their relationship have been distorted by her own remorse. How well did she ever really know him?