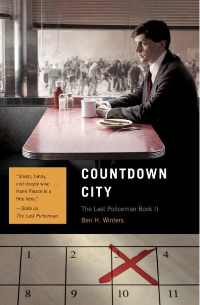 Ben Winters is known for the 2009 parody novel Sense and Sensibility and Sea Monsters, which reached the New York Times best seller list in September 2009. His second novel, Android Karenina (Quirk Books), was published in June 2010; his young adult novel, The Secret Life of Ms. Finkleman, was published by HarperCollins on September 21, 2010. Finkleman was nominated for an Edgar Award by the Mystery Writers of America on Jan. 19, 2011. In 2011, Winters published a second book in the Ms. Finkleman series, titled The Mystery of the Missing Everything, and Bedbugs, a horror novel for adults.

In July 2012 he published The Last Policeman, a pre-apocalyptic detective story. That novel was named a Best Book of July 2012 by Amazon.com and, later, was listed on Amazon’s Best Books of 2012. It also won an Edgar award in 2013. Winters said that The Last Policeman was the first book in a trilogy, and Quirk Books published its first sequel, Countdown City, in July 2013.

I spoke with Ben about the first two books in the trilogy.