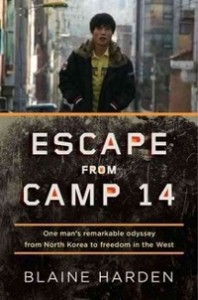 Blaine Harden is an author and journalist who reports for PBS Frontline and contributes to The Economist. He worked for The Washington Post as a correspondent in Africa, Eastern Europe and Asia, as well as in New York and Seattle. He was also a national correspondent for The New York Times and writer for the Times Magazine.

I remember reading his intelligent reporting in the Washington Post when I lived there. This book, best described as skeptical non-fiction, is a fascinating look at life in North Korea, and the warping of human existence by this kind of pervasive dictatorship. The subject of the book is Shin Dong-hyuk, the only person to have been born and raised in a North Korean prison camp. He escaped to the west, and had a tale to tell. Harden does his best to vet Shin’s story.

A note: early in the interview, I make reference to a book entitled The Orphan Master’s Son, by Adam Johnson. It is a remarkable novel about North Korea, and covers some of the same emotional and social ground as Harden’s book. I had interviewed Johnson, but the interview was technically beneath broadcast standards. I apologize to Mr. Johnson, and recommend the book.