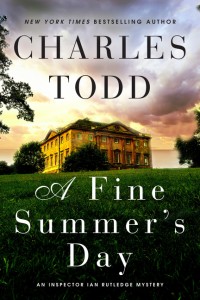 Charles and Caroline Todd are a mother-and-son writing team who live on the east coast of the United States. Charles and Caroline have a rich storytelling heritage. Both spent many evenings on the porch listening to their fathers and grandfathers reminisce. And a maternal grandmother told marvelous ghost stories. This tradition allows them to write with passion about events before their own time. And an uncle/great-uncle who served as a flyer in WWI aroused an early interest in the Great War.

Charles learned the rich history of Britain, including the legends of King Arthur, William Wallace, and other heroes, as a child. Books on Nelson and by Winston Churchill were always at hand. Their many trips to England gave them the opportunity to spend time in villages and the countryside, where there’a different viewpoint from that of the large cities. Their travels are at the heart of the series they began ten years ago.

I spoke with them about their latest Ian Rutledge novel, “A Fine Summer’s Day.”