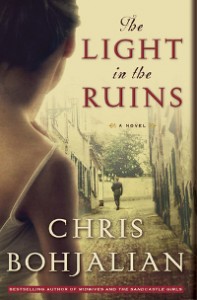 Chris Bohjalian is the critically-acclaimed author of 16 books, including nine New York Times bestsellers. His work has been translated into over 25 languages and three times become movies.
His new novel, The Light in the Ruins, debuted as a New York Times, Publishers Weekly, and national Indiebound bestseller. The book is a re-imagining of Romeo and Juliet set in Tuscany at the end of the Second World War. It also features a fascinating female character, who I hope will be included in future novels.

His epic novel of the Armenian Genocide, The Sandcastle Girls, was published in paperback in April. His books have been chosen as Best Books of the Year by the Washington Post, the St. Louis Post-Dispatch, the Hartford Courant, Publishers Weekly, Library Journal, Kirkus Reviews, Bookpage, and Salon.

The Light in the Ruins by Chris Bohjalian
Doubleday, 2013