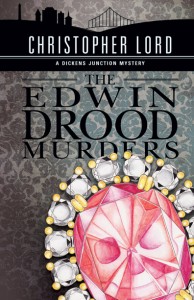 Christoper Lord was born in Astoria, Oregon. He now lives in Portland with his partner of twenty years and their Devon Rex, Miss Corey, the inspiration for Simon’s Miss Tox. I spoke with him about his latest novel, The Edwin Drood Murders.

The Droodists have arrived in Dickens Junction. Local bookstore owner Simon Alastair has his hands full in his role as co-chair for the latest convention honoring Charles Dickens’s uncompleted novel, The Mystery of Edwin Drood. A movie star, a pesky blogger, dueling scholars, a stage hypnotist, and an old family friend (among others) all have claims on Simon’s time. In addition, some Droodists are clearly more–or less–than they appear, including a mysterious young man with the improbable name of Edwin Drood.