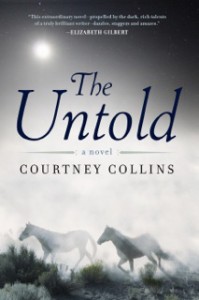 Here in the U.S. from her home on the Goulburn River in Victoria, Australia is Courtney Collins with The Untold (Amy Einhorn/Putnam), a debut novel that has won accolades in Australia (where it was nominated for virtually every award of consequence) and beyond. It’s the story of an intrepid young woman living and persevering through harrowing circumstances in outback country nearly one hundred years ago. “A captivating, epic novel that never loses its heart to scope, The Untold is a surreal saga set in a rugged, unforgiving landscape. Courtney Collins paints a devastating portrait of long-shot love.” – Patrick DeWitt.