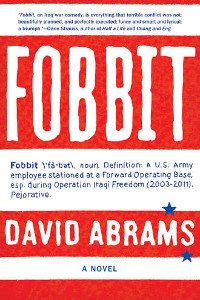 David Abrams’ debut novel about the Iraq War, Fobbit, was named a New York Times Notable Book of 2012 and a Best Book of 2012 by Paste Magazine, St. Louis Post-Dispatch and Barnes and Noble. He regularly blogs about the literary life at The Quivering Pen.

Abrams retired in 2008 after a 20-year career in the active-duty Army as a journalist.  The journal he kept during that year formed the blueprint for the novel which would later become known as Fobbit.  It has been called the Catch-22 of our time.