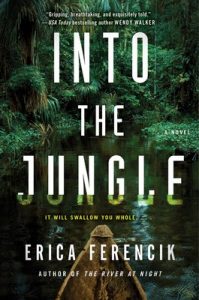 Erica Ferencik is a Massachusetts-based novelist, screenwriter and stand-up comic.
Ferencik was born in Urbana, Illinois and later obtained a Bachelor of Arts degree in painting and French from University of Massachusetts and later a Master of Arts in creative writing from Boston University.
Ferencik did stand-up comedy for ten years at various comedy clubs in Boston and New York and was also a material writer for David Letterman during the early years of his national late-night show.
Her novel, Into the Jungle, is a thriller about an aimless teenager who winds up living in a village in the Bolivian jungle because she has followed a man she loves back to his home. I spoke with her here in our studios.

Into the Jungle by Erica Ferencik
Gallery/Scout Press, 2019