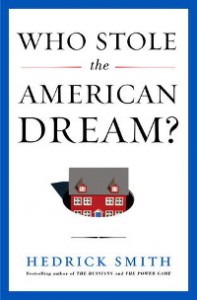 Hedrick Smith  is a Pulitzer Prize-winning former reporter and editor for The New York Times, an Emmy Award-winning producer/correspondent for the PBS show Frontline, and author of several books.

He was educated at The Choate School (now Choate Rosemary Hall) in Wallingford, Connecticut and at Williams College, and did graduate work at Oxford University. He was a reporter for the New York Times from 1962 to 1988. He won the Pulitzer Prize for international reporting in 1974 for stories from Russia and Eastern Europe.

He is the author of, most recently, Who Stole the American Dream?  I read this alternating between outrage and despair.  No matter what your personal politics are, you should read this book.  Smith comes from a time when journalism was still an honorable profession, and investigative reporters were (mostly) driven by a desire to do good and effect reform.

If you wonder how we wound up with the greatest disparity between rich and poor since the bad old days, a crumbling banking system, predatory mortgage lenders, greedy CEOs, and a horrifying deficit, this book is for you.

And, unlike political screeds from both sides, this is fact-checked and honest.

Who Stole the American Dream? by Hedrick Smith
Random House, 2012