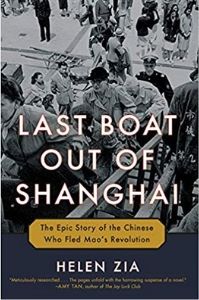 Helen Zia is a Chinese-American journalist and activist for Asian American and LGBTQ rights.
Zia was born in Newark, New Jersey in 1952 to first generation immigrants from Shanghai. At five years old, she began working in her parent’s floral novelty business. She entered Princeton University in the early 1970s as a student in the Woodrow Wilson School of Public and International Affairs. She was a member of its first graduating class of women. As a student, Zia was among the founders of the Asian American Students Association. She was also a vocal anti-war activist, voicing her Opposition to U.S. involvement in the Vietnam War, a firm believer in feminism and active in movements creating cross racial unity among low income people of color.
Zia entered medical school at Tufts University in 1974, but quit in 1976. She eventually moved to Detroit, Michigan, working as a construction laborer, an autoworker and a community organizer, after which she discovered her life’s work as a journalist and writer.
She is also a warm and engaging person and a great interview. I spoke with her about Last Boat Out of Shanghai, the dramatic real life stories of four young people caught up in the mass exodus of Shanghai in the wake of China’s 1949 Communist revolution—a heartrending precursor to the struggles faced by immigrants today.

Last Boat Out of Shanghai by Helen Zia
Ballantine Books, 2019