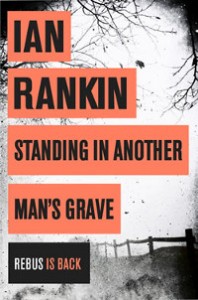 Born in the Kingdom of Fife in 1960, Ian Rankin graduated from the University of Edinburgh in 1982, and then spent three years writing novels when he was supposed to be working towards a PhD in Scottish Literature. His first Rebus novel was published in 1987, and the Rebus books are now translated into twenty-two languages and are bestsellers on several continents.

Rankin is the UK’s number 1 bestselling crime author. Famous for the acclaimed Inspector Rebus series which has topped the Sunday Times bestseller lists and been adapted into a major TV series, Ian Rankin is also the author of three books which were originally published under the pseudonym of Jack Harvey (a combination of Ian’s son’s first name and his wife, Miranda’s maiden name).

He recently received the OBE for services to literature, opting to receive the prize in his home city of Edinburgh, where he lives with his partner and two sons.

Standing in Another Man’s Grave is the 21st John Rebus novel.