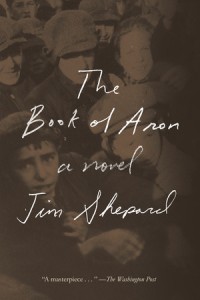 Jim Shepard is an American author and professor of creative writing and film at Williams College. Shepard’s novels and stories often rely on substantial historical research based on real events.

His short fiction has appeared in, among other magazines, Harper’s, McSweeney’s, The Paris Review, The Atlantic Monthly, Esquire, DoubleTake, the New Yorker, Granta, Zoetrope: All-Story, and Playboy, and he was a columnist on film for the magazine The Believer. Four of his stories have been chosen for the Best American Short Stories, and one for a Pushcart Prize.

I spoke with him about his latest novel, The Book of Aron.