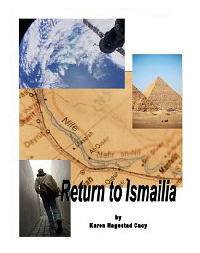 Her latest novel, Return to Ismailia derives from experiences in Cairo, Egypt in 1964. The characters are drawn from actual people but the story is fiction. The Middle East is a complicated region of the world. Often it is ill-served by the world’s distortions. As in this novel, the truth can be far closer to home and more personal.

Return to Ismailia by Karen Hagestad Cacy
On Demand Books, 2012