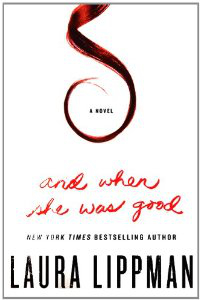 Laura Lippman was born in Atlanta, Georgia, and raised in Baltimore, Maryland.  Lippman is a former reporter for the (now defunct) San Antonio Light and the Baltimore Sun. She is best known for writing a series of novels set in Baltimore and featuring Tess Monaghan, a reporter (like Lippman herself) turned private investigator. Lippman’s works have won the Agatha, Anthony, Edgar, Nero, Gumshoe and Shamus awards. Her 2007 release, What the Dead Know, was the first of her books to make the New York Times bestseller list, and was shortlisted for the Crime Writer’s Association Dagger Award. In addition to the Tess Monaghan novels, Lippman wrote 2003’s Every Secret Thing, which has been optioned for the movies by Academy Award–winning actor Frances McDormand.

She is one of the few genre writers, like Raymond Chandler and Walter Mosley, whose novels are read as literature.  She is also and old pal, and I try to see her when I visit back east.

And When She Was Good by Laura Lippman
William Morrow, 2012