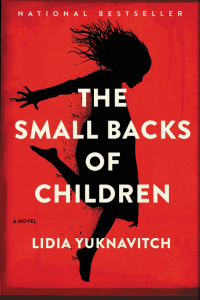 Lidia Yuknavitch is the author of The Chronology of Water: A Memoir and three works of short fiction: Her Other Mouths, Liberty’s Excess, and Real to Reel, as well as a book of literary criticism, Allegories of Violence. Her work has appeared in Ms., The Iowa Review, Exquisite Corpse, Another Chicago Magazine, Fiction International, Zyzzyva, and elsewhere. Her book Real to Reel was a finalist for the Oregon Book Award and she is the recipient of awards and  fellowships from Poets and Writers and Literary Arts, Inc. The Chronology of Water won the Oregon Book Award Reader’s Choice 2012 and the PNBA Award 2012, and was a finalist for the 2012 PEN Center USA creative nonfiction award. Her work appears in the anthologies Life As We Show It, Forms At War, Wreckage of Reason. She teaches writing, literature, film, and women’s studies in Oregon.

I spoke with her about her latest novel, The Small Backs of Children.

Note: about 25 minutes into the interview, there is a discussion of a sexual act.

The Small Backs of Children by Lidia Yuknavitch
Harper, 2015