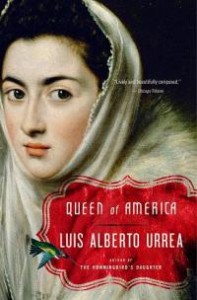 Luis Alberto Urrea is a Mexican American poet, novelist, and essayist, the son of a Mexican father and an American mother.  His work has won many awards, including the Edgar.

In two heavily researched historical novels, The Hummingbird’s Daughter and Queen of America, Urrea tells the story of his great aunt, Teresita Urrea, who was known as “The Saint of Cabora” and “The Mexican Joan of Arc”.