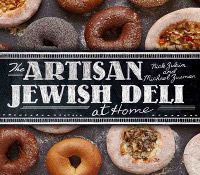 If you are Jewish, or grew up in an area where there was a significant Jewish population, you may have fallen in love with deli foods: corned beef, pastrami, knishes, kasha, etc. Many of these foods may be prepared at home, but foodies with current dietary and culinary standards look askance at the animal-fat-rich menu.

Michael Zusman and Nick Zukin have produced a cookbook adapting many of these dishes to modern tastes, without sacrificing their comfort-food origins. The title of the book is The Artisan Jewish Deli at Home.

Michael is a free-lance food critic and artisan baker, when he is not doing his duties as a state-court judge. Nick, who was not able to make the interview, is one of the founders of Kenny and Zuke’s, a first-rate deli restaurant in downtown Portland.