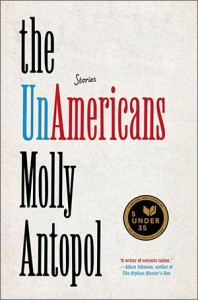 Molly Antopol is a recent Wallace Stegner Fellow and current Jones Lecturer at Stanford University. She’s a recipient of the 5 Under 35 award from the National Book Foundation. Her debut story collection, The UnAmericans, is forthcoming from W.W. Norton on February 3, 2014, and in six other countries. The book is a Barnes and Noble Discover Great New Writers selection, and an Indies Introduce Debut Authors and Indie Next pick. Antopol received her M.F.A. from Columbia University, and her writing has appeared or is forthcoming on NPR’s This American Life, online at The New Yorker, and in One Story, Ecotone, Glimmer Train, The Oxford American, American Short Fiction, Mississippi Review Prize Stories, Tablet, The Wall Street Journal, San Francisco Chronicle, The Rumpus, Southern Humanities Review and elsewhere. She is also a writer-in-residence at the Summer Literary Seminars in Lithuania.

The UnAmericans by Molly Antopol
Norton, 2014