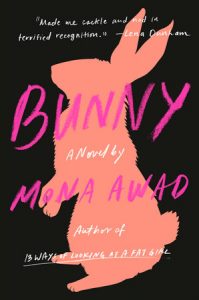 Mona Awad was born in Montreal and has lived in the US since 2009. Her debut novel, 13 WAYS OF LOOKING AT A FAT GIRL (Penguin), won the Amazon Best First Novel Award, the Colorado Book Award and was shortlisted for the Giller Prize and the Arab American Book Award. It was also long-listed for the Stephen Leacock Award for Humour and the International Dublin Award. Her new novel, BUNNY was released June 11, with Viking Press. I spoke with her by phone, and the call dropped about halfway through the interview. We resumed shortly. It does not do any harm to our conversation.