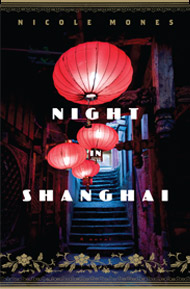 Nicole Mones is an American novelist and food writer. As of March 2013 she has published four novels, entitled Lost in Translation, which appeared in 1998, A Cup of Light (2002), and The Last Chinese Chef, (2007), and in March 2014, Night in Shanghai. Lost in Translation won the 2000 Janet Heidinger Kafka Prize awarded by the Susan B. Anthony Institute for Gender and Women’s Studies and the Department of English at the University of Rochester for best work of fiction by an American woman, and also the Pacific Northwest Annual Book Award, a five-state prize. The Last Chinese Chef was the only American finalist for the international Kiriyama Prize and also a World Gourmand Award winner in the Chinese cookbook category, although it is a novel with no recipes.

I spoke with Nicole by phone for Night in Shanghai.  It is based on historical incidents, and she has remarkable pictures on her website, NicoleMones.com, featuring many of the characters mentioned in the book.