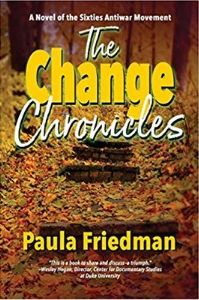 Paula Friedman’s honors include Pushcart Prize nominations and New Millenium Writings, OSPA, and other awards and honors, as well as Centrum and Soapstone residencies and fellowships. Her short fiction and poetry have appeared in numerous print and online literary magazines and anthologies. Ursula K. Le Guin called Friedman’s debut novel, The Rescuer’s Path (2012, 2018) “exciting, physically vivid, and romantic.”
I spoke with Paula at our studios for her latest novel.