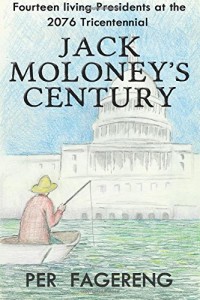 Per Fagereng is an old pal. I have known him since I started in Portland radio at KBOO-FM, almost 25 years ago.

He is a political activist, talk show host, and singer of songs promoting labor and progressive causes. His novel is entitled “Jack Moloney’s Century,” which takes us about 60 years into the future.

It is a cautionary tale, but not a despairing one.