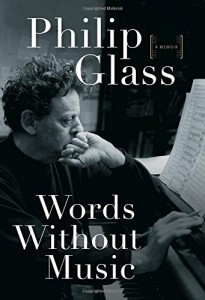 Philip Glass is both influential and controversial, but not as much as he used to be. The world may have caught up with him.

I spoke with him by phone, even though he was in Portland, such were the demands on his time. Even after a long day, he was gracious and warm.

The title of his memoir is Words Without Music.

Words Without Music: A Memoir by Philip Glass
Liveright, 2015