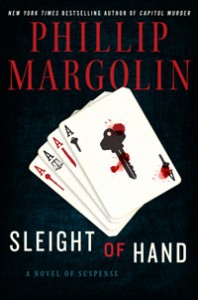 Phillip Margolin, in his own words:
I grew up in New York City and Levittown, New York. In 1965, I graduated from the American University in Washington, D.C., with a bachelor’s degree in government. I spent 1965 to 1967 in Liberia, West Africa, as a Peace Corps volunteer, and graduated from New York University School of Law in 1970, working my way through the last two years by teaching junior high school at night in the South Bronx.
As a trial attorney, I handled all sorts of criminal cases in state and federal court, and have represented approximately thirty people charged with homicide, several of whom faced the death penalty. I was the first Oregon attorney to use battered women’s syndrome to defend a woman accused of murdering her spouse.
Since 1996, I have been writing full-time. All of my novels have been bestsellers. Heartstone, my first novel, was nominated by the Mystery Writers of America for an Edgar for best original paperback mystery of 1978. My second novel, The Last Innocent Man, was made into an HBO movie. Gone, But Not Forgotten has been sold to more than twenty-five foreign publishers and was made into a miniseries starring Brooke Shields.

Added comments from Ed Goldberg:
I will add that Phil is a wonderful man, the dean of mystery/thriller writers here in Portland, and a generous man with his time and advice. I spoke with him about his latest book, Sleight of Hand.