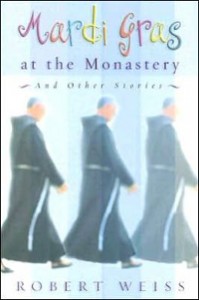 I first spoke with Robert Weiss when I was still working at KBOO. His memoir, “Fire Mission! the siege at Mortain, Normandy, August 1944,” first published as “Enemy North, South, East, West,” is published by White Mane Publishing Company. Although most bookstores no longer stock the book, any bookstore will order it. It is a remarkable story of courage, perseverance and initiative. Bob received the Legion of Honor for these experiences from the French government on March 17, 2007.
His latest, “Mardi Gras at the Monastery, and Other Stories,” is a collection of short stories and personal essays.

Mardi Gras at the Monastery, and Other Stories by Robert Weiss
White Mane Pub, 2006