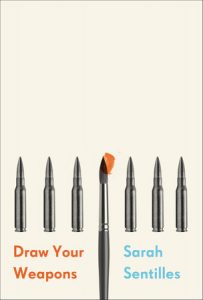 Sarah Sentilles is a moral force. I spoke with her at the All Classical studios. In a book that is, by turns, humorous, provoctative and horrifying, she makes a case for the power of the image and its effect on the viewer. This is from her website:

In Draw Your Weapons, Sentilles tells the true stories of Howard, a conscientious objector from World War II, and Miles, a former prison guard at Abu Ghraib and, in the process, she challenges conventional thinking about how war is waged, witnessed, and resisted. The pacifist and the soldier both create art in response to war – Howard builds a violin; Miles paints portraits of detainees.