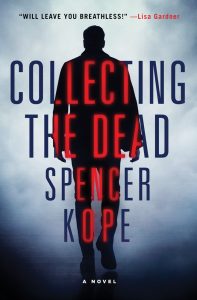 Here is Spencer Kope in his own words:

I came to my career as a Crime Analyst with the Whatcom County Sheriff’s Office after spending the better part of my adult life (up to that point) in the intelligence business, first as a Russian linguist in the Navy, then as an Intelligence Operations Specialist with the Office of Naval Intelligence (ONI). Along the way I did and saw a lot of interesting, sometimes disturbing things, and it was during my Navy years that I started writing.

While my earlier novels were geared for the young adult market, my position as Crime Analyst got me thinking:  If I can solve crimes, why not write about them?

I spoke with Spencer at our All Classical studios.