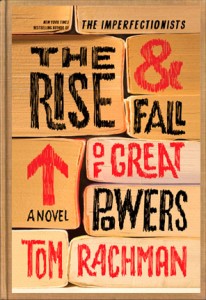 I first spoke with Tom for his novel The Imperfectionists.  If you have not read it, I recommend that you hunt down a copy.  He was in Portland for his new book, The Rise and Fall of Great Powers.  He is a terrific interview.  This from Wikipedia:

Tom Rachman is an English/Canadian novelist. His debut novel is The Imperfectionists, published in 2010 by Dial Press, an imprint of Random House. The book has been published in 25 languages.

Rachman was born in London, England and grew up in Vancouver. Rachman studied at the University of Toronto and obtained a Master’s Degree from Columbia University Graduate School of Journalism. He worked as a journalist for the Associated Press. He currently lives in London and is working on his third novel.