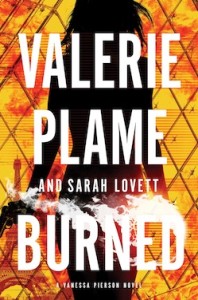 Valerie Plame was in the news in 2003 when she was outed as a CIA officer by a Washington Post columnist.  A major flap ensued.  This ended her career in the Company, but opened a door for her to begin writing spy novels (in collaboration with Sarah Lovett).  The first, Blowback, was published in 2013.  I spoke with her while she was on tour with the second in the series, Burned.