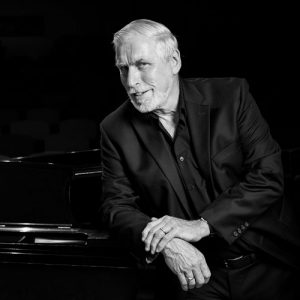 I grew up on an English farm and listened constantly to BBC Radio where I developed an early fascination for entertainment. In my late teens I joined a youth theater and toured in Romeo & Juliet, before moving to Scotland, where my love for radio, film and writing merged together when I became a film correspondent for BBC Radio and Thompson Publications. I needed a larger canvas to work with and moved to Hollywood in 1980, covering the Academy Awards, interviewing Alfred Hitchcock and Mel Blanc, and eventually narrating more than 1,000 educational audio stories. Thirty-five years later I am still doing the work I love. I host programming on All Classical Portland on weekend afternoons and evenings, occasionally emcee events and classical concerts, and sometimes even narrate with orchestras. In 2006 I created The Score, a national (and now international) syndicated film music program, heard on All Classical Portland every Saturday and Sunday at 2 p.m. Writing, producing and hosting this program is a wonderful opportunity for me to share, with listeners, my passion for symphonic music in the movies.

The British, they say, are crazy about their gardens. I am, too. This helped when I became a vegetarian in 1997 and could grow some of my own food. My childhood love of animals has always made me aware of their importance on our planet. In 1997 I co-founded In Defense of Animals-Africa which operates a chimpanzee rescue center in Cameroon, West Africa.

Edmund writes and hosts The Score, a nationally syndicated film music program, which you can hear every Saturday and Sunday at 2 p.m.