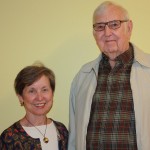 What is your history with All Classical Portland?
We moved to Portland from San Diego in 2004. In looking for a source of classical music on the radio, we soon discovered your station. It is not an exaggeration to say that once having found your place on the radio dial, we have rarely, if ever, changed stations. We soon became aware that the station was listener supported (for the most part) and began to contribute to the fundraisers regularly. Our contributions increased more or less annually until about a year ago when we decided that we could be most helpful by becoming sustaining members. This is our current status.

What inspires you to contribute to All Classical Portland?
Initially, we contributed to the station to support classical music in Portland. We are inspired to continue and increase our contributions because of the very high quality of the music itself but also due to the talented and engaging staff that bring this music to life. Their dedication and personality shows in the continued and increasing quality of the programs they present. We often remark to each other that the staff themselves are a very attractive part of the total programming.

What do you wish for the station in the future?
We are impressed with the ongoing efforts of the station to broaden its outreach to the Portland community by increasing its scope, reaching new audiences, improving its physical present and encouraging the interaction with other cultural organizations in Portland. We think it to be extremely important to the long-term survival of the station to include a mix of ages, races, educational backgrounds, occupations and cultural interests in its membership. Increased attention might be devoted to the younger population – tomorrow’s members.

How would you encourage listeners to contribute or to become a future funder through our planned giving option?
In order for people to exercise their time and efforts in these respects, they must be persuaded that it is in their best interests, as well as those of the broader community to assure that a high quality cultural entity like All Classical become and maintain its presence in their lives. All Classical occupies a discrete and reasonably well-defined niche in Portland. The station must constantly define and solidify its boundaries and emphasize to its supporters how important its place is in the cultural life of the city.