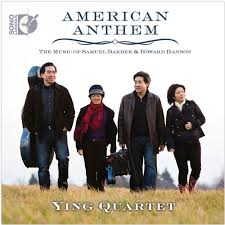 Adagio for Strings is one of the best-known works by Samuel Barber.  It’s arguably one of the most famous pieces of American classical music ever.  It’s less-well known as its original use: the slow movement to his string quartet.  A recent CD by the Ying Quartet makes the Barber quartet the launch point for a fascinating exploration of American composers and the development of the string quartet in this country.  They made a fascinating discovery along the way:  an unpublished, practically forgotten, original finale!  In my first “Music Director Musings” piece, you’re going to get to hear the world premiere recording of this finale, which is completely different from the one which Barber ultimately wrote and published.  Shortly after listening to the Ying’s CD, two other groups released discs of American works for quartet – Cypress Quartet and Brodsky, Quartet – so I share some of their explorations as well.

To see the recordings that John features click on the links below: