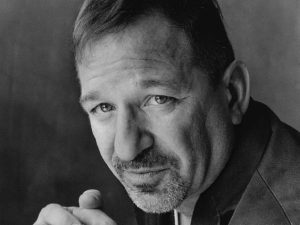 David Biespiel is a poet, memoirist, and critic. He is the author of eleven books, among them Republic Café, The Education of a Young Poet, and Every Writer Has a Thousand Faces. A memoir, A Place of Exodus, will be published in September 2020. A contributor to The New Republic, The New Yorker, and Slate, he has won a number of awards for his writing, including Lannan Foundation, National Endowment for the Arts, and Stegner fellowships, two Oregon Book Awards, and he has been a finalist for the National Book Critics Circle Balakian citation. He is the founder of the Attic Institute of Arts and Letters and Poet-in- Residence at Oregon State University.

It isn’t so much that my brother
Didn’t die young, or that he’s alive
Among the counties of the mortal
Bayous I love, at the county line,
Or that, at the beginning of the
Century, Texas, in spite of its
Hot beauty, is cold as another
Republic of magpies keeping the
Granite awake, or that the weight of
His soul is stone poor, dirt, deep farmer
That he is, or was, farming poorly,
Poor as a widower haunting
His own grave—it isn’t even
The gravestone’s chiselled stone
Letters, or those softened clean off, or
The names and dates you can imagine
As facts of our lives once lived in
Failure, but only the consonants
Camouflaged for death that I
Keep hearing all day as if all is lost.
He’s alive as any cloud falling
As rain now into the open mouths
Of the dead, alive as a bruise
Disappearing in my body, like
Passing rain and wind, until the sky
Heals, and the blood of an hour’s
Silent-evening nothing vanishes.
You’d think my brother’s last days
Move past me on every side, the hours
Settling like a tomb through nothing
Of the infinite spirit of his
Half-broken heart, half-spoken
Voice rising like the drawing of water.
He kisses raindrops on the grass. Kisses
For the city he was born in.
Drops for the echo of a future
He enters, as if entering
A house to die in. He can’t make
Up his mind. —As if from a promise
From that house of madness,
I’m required to say,
Cold, beauty, pain will be done in ten
Thousand days from now, and all
That will be left will be the first taste
Of time, first forgotten day of the week,
Whatever city he’s left us in, added
Or subtracted from a bright field running
To blue in the horse-light of spring.
—My brother counts his own hours now,
And I’m thinking of all the lightning-
Fractures of sky I had to go
Under with nowhere to go, nothing to
Do but climb the cloud of long ago,
Feeling again the cold of his hand
The last time, until pleas of
A grunting voice have nothing to say.

This poem originally appeared in The New Yorker, Dec 9, 2016