This week, the Oregon Repertory Singers open our Fall into the Arts series! They’ll perform works by two composers with Oregon connections, Joan Szymko and Morten Lauridsen, and we’ll hear from artistic director Ethan Sperry; and maestro Carlos Kalmar takes us to the Arlene Schnitzer concert Hall for the Oregon Symphony’s thrilling performance of Gustav Mahler’s Symphony Number 6, the “Tragic.” Join Host and Producer Brandi Parisi for this memorable episode.

Read the Program Notes for this week’s broadcast below or download the full program here!

This work is a setting of “Preghiera al Crocifisso” (“Prayer before the Crucifix”), one of the oldest prayers of St. Francis. Many manuscripts indicate that it was created as he prayed before the painted iron crucifix in the church of San Damiano, near Assisi, which he frequented shortly after his conversion.

Composer Joan Szymko had the opportunity to visit this church in the summer of 2005, and discovered the prayer while kneeling in front of the very same cross that St. Francis did centuries before. First composed for the Chamber Choir of First Unitarian Church in Portland, Oregon, this prayer asks for universal needs– faith, hope, perception, charity, in order to truly follow God’s will.

Cast your light into the darkness of my heart.
Give me right faith, firm hope,
Perfect charity and profound humility.
Lord, give me
Wisdom and perception
So that I may do what is truly your holy will.

Prayer
Morten Lauridsen
Text by Dana Gioia
The text of Morten Lauridsen’s Prayer is a poem by Dana Gioia. He wrote “Prayer” as an elegy or benediction for his first son, who died at four months. Lauridsen’s setting of the poem has evolved through the years: initially appearing in 2007 as a solo song for baritone and piano, the material was quickly developed into a longer and more elaborate choral work. Gioia notes that in his original work, “the poem never overtly states its subject matter or occasion. The personal emotions are communicated only indirectly through the imagery.”

Kyrie from Mass in G Minor
Ralph Vaughan Williams
This Kyrie is the first of five movements in the Mass in G Minor by Ralph Vaughan Williams. Written in 1921, this mass is scored for double choir and four soloists, with dedications to the Whitsuntide Singers and fellow composer Gustav Holst. The use of modern idiom, in conjunction with an older liturgical style, has contributed greatly to its continued success. In his later years, Vaughan Williams toed the line between agnosticism and atheism. Despite not being a professing Christian, Williams was never deterred from writing such a religious piece. “There is no reason why an atheist could not write a good mass,” he insisted.

Symphony No. 6 in A Minor, “Tragic” Gustav Mahler
Mahler’s sixth symphony, composed in 1903 and 1904, is darkly profound–a stark contrast to the upbeat place he was in life during its creation. Sometimes referred to by the nickname “Tragische,”or “Tragic,”the work has been praised for its stirring message of helplessness and tragedy. The wistfully nostalgic themes of the Andante carry over into a much ‘weightier’ scherzo, which Mahler has described as “children’s voices [that] become more and more tragic, and at the end there is one fading little voice, whimpering.” The finale is the longest in any work by Gustav Mahler, and with each strike of the hammer it emphasizes the profound sense of loss that can be found in the work–there is no escape from the fate that Mahler has conjured up through this darkly powerful piece. 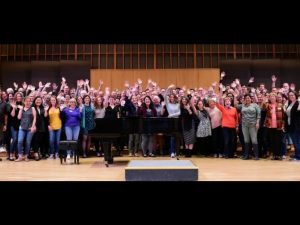 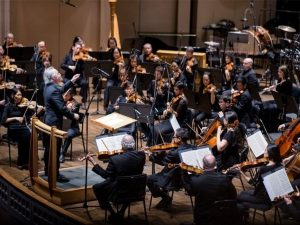