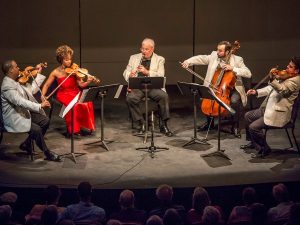 Join All Classical Portland for a five-part radio series bringing you concert highlights from Chamber Music Northwest’s recent summer seasons! The series airs May 21 – June 21 on Thursday evenings at 7pm PST and will be encored each following Sunday at 4pm PST. Listen to the most recent episode on our Audio Archive.

This series highlights dynamic performances from Chamber Music Northwest’s past summer seasons. Through concert excerpts and interviews, All Classical Portland celebrates Chamber Music Northwest on the air in lieu of live performances this summer. Robert McBride returns to the airwaves to co-host this special broadcast series with President & CEO Suzanne Nance, and it is produced by Sarah Zwinklis and Silvester Vicic.

The five-part weekly series began on May 21 with works by Fauré and Glazunov and John Leszczynski’s They Might be Gods. Episodes aired on Thursday evenings will be encored each following Sunday at 4pm PST. In addition to concert performance highlights, the series will feature interviews with musicians including longtime CMNW Artistic Director David Shifrin who shared: “I am so excited to have the opportunity to bring outstanding chamber music directly to people in their homes at a time when it’s needed most. This will be the first summer in over 40 years that I won’t be performing…I am glad to be able to join you on the radio through our collaboration with All Classical Portland!”

And be sure to check out Chamber Music Northwest’s upcoming free virtual Summer Festival! Each week from June 22 – July 26, CMNW will offer several streaming concerts featuring both the best performances of recent summer festivals and live performances by some of our favorite artists from around the country. There will also be virtual education and family programs, so that everyone can enjoy the music. Full schedule coming soon! Learn more at their website cmnw.org