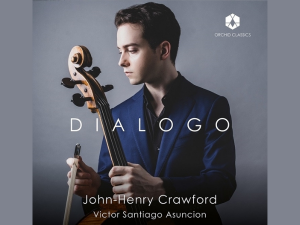 On the most recent installment of the John Pitman Review, John speaks with cellist John-Henry Crawford about the debut release of  “Dialogo.” Crawford chose the title after the unaccompanied cello work by Hungarian composer, György Ligeti.

Mr. Crawford also shares the fascinating history of the cello he plays, which has been in his family for over a century.

Learn more about John-Henry Crawford and “Dialogo” in John’s review.