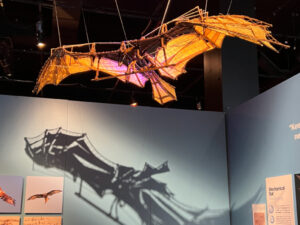 Considered one of history’s greatest minds and talents, Leonardo da Vinci was an artist, architect, and engineer whose paintings are among the most widely popular and influential of the Renaissance and whose notebooks reveal a pursuit of scientific inquiry and mechanical inventiveness that were centuries ahead of their time.

Now, for the first time ever in the Pacific Northwest, two original Leonardo da Vinci folios from the 500-year-old Codex Atlanticus along with over three dozen reconstructions of Leonardo’s extraordinary machines are brought together for The World of Leonardo da Vinci exhibition at OMSI.

Curated by the noted experts at the Leonardo3 Museum in Milan, this unparalleled exhibition uses 15th and 16th century techniques along with the latest technology to bring Leonardo’s creations and visions to life allowing audiences to explore the true artistry and virtuosity of this influential genius. Learn more at omsi.edu/da-vinci

OMSI: The World of da Vinci
On display March 19 – September 5, 2022
OMSI members get discounted admission to The World of Leonardo da Vinci.