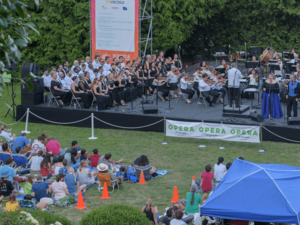 Portland SummerFest invites you to the 20th Anniversary Celebration and performance of Opera in the Park! Join us on Sunday, August 7, 2022 at 6:00 PM at the Rose Garden Amphitheater in Washington Park for this FREE, outdoor performance of Giuseppe Verdi’s grand opera Aida, starring Metropolitan Opera soprano Angela Brown and conducted by Keith Clark.

This event is free and all are welcome! Bring a picnic and your friends and family to enjoy one of the most beloved operas in the world. Aida‘s timeless music will take you on a journey through a sweeping tale of love and heroics, set in Ancient Egypt with soloists, orchestra and chorus in the beautiful outdoor setting of Washington Park.

All Classical Portland is proud to be the Official Media Sponsor of Portland SummerFest’s Opera in the Park.

Aida is perfect for your first opera, as well as a favorite of opera buffs. The story is a roller coaster of emotions told through Verdi’s powerful music. Aida, an Ethiopian princess held captive in Egypt, falls in love with Radames, a General. When he is sent to war with Ethiopia, we follow the conflict of Aida’s love for both Radames and her country.

Soprano Angela Brown has graced the leading opera and symphonic stages across six continents. Her voice has been the inspiration for groundbreaking, new works by American opera and symphonic composers. She is co-host of the award-winning podcast Melanated Moments in Classical Music and founder of Morning Brown, Incorporated, a nonprofit with the mission of bridging the gap between accessible, live-music programs and historically excluded audiences.

Her vocal artistry is featured on the two-time Grammy Award® winning recording “Ask Your Mama.” She sang the lead role in Tosca in 2018 at Opera in the Park.

Keith Clark is the Co-Founder of Portland SummerFest (now Opera in the Park Portland), 20 years ago, and the Astoria Music Festival in Oregon. He is internationally active as a conductor, composer and recording artist. He was awarded the prestigious American Prize for Artistic Excellence in Opera Conducting for the Pacific Northwest premiere of Alban Berg’s Wozzeck in the Astoria Music Festival, where he led 28 operas. In Russia, he was named Principal Guest Conductor of the Siberian State Philharmonic and a Producing Director at the Globus Theater in Novosibirsk, where he led the prize-winning Russian premiere of West Side Story. In Salzburg, he led annual productions of Mozart operas with the Amadeus Opern Ensemble, and his festival appearances include Vienna, Bucharest, Budapest, Siena, Los Angeles, Seoul, and Switzerland.

Portland SummerFest presents Opera in the Park has brought free opera to more than 50,000 Oregonians since the first performance of The Barber of Seville in 2003. It repeatedly draws the largest crowds of the Washington Park Summer Concert Series.

Audiences of all ages and backgrounds come to Washington Park to enjoy this unique contribution to the cultural life of Portland. Presented in concert format with full orchestra and lively narration, these concerts have introduced thousands of Portlanders to the world of opera and been avidly attended by a growing number of loyal fans.