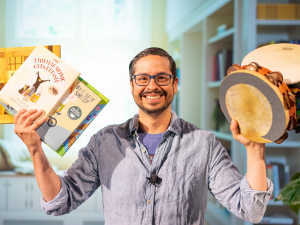 Over the past few months, we have seen so many inspiring stories of families and friends coming together – and your Oregon Symphony has been working on a way to keep the youngest among them entertained and uplifted.

Introducing Symphony Storytime, a fun, original video series designed for kids seven and under. Each episode presents a great children’s story narrated by a master storyteller, with accompaniment by an Oregon Symphony musician performing the book’s “soundtrack,” as well as an engaging lesson about the instrument featured in the episode.

These videos will be released in English and Spanish – and each and every one is a unique story. There will be a total of nine English episodes and four Spanish episodes, with new episodes in both languages released on June 25, July 2, and July 9.

Go to orsymphony.org/storytime and your kids can watch the latest Symphony Storytime episodes. They’ll live musically ever after!