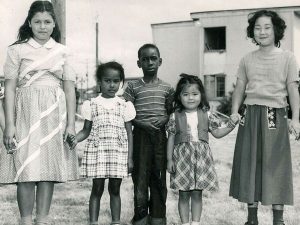 Vanport: A Surge of Social Change
On view through November 15, 2021

Home to a multiracial and multicultural community of over 40,000 residents, Vanport was built to house migrant workers and their families who relocated to the Portland region during World War II. At its peak, Vanport became the largest wartime federal housing project in the nation and second largest city in Oregon. On May 30, 1948 a devastating flood destroyed the entire city, killing 15 people and leaving thousands houseless. Vanport was never rebuilt, but its legacy lives on.

Vanport: A Surge of Social Change is a Vanport Mosaic exhibit developed in collaboration with Pittock Mansion. Learn more at pittockmansion.org/exhibits