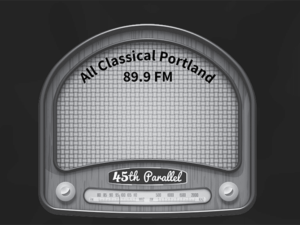 Join 45th Parallel Universe‘s The Gemini Project and some of your favorite All Classical Portland hosts for Radio Happening on Thursday, October 6, 2022, at 7:00 PM PT at The Old Church at The Madeleine. This special collaboration includes a live performance of The City Wears a Slouch Hat, a 1942 radio play by John Cage and Kenneth Patchen. Louanne Moldovan directs the cast of well-loved All Classical Portland radio hosts Warren Black, Robert McBride, Suzanne Nance, Brandi Parisi, John Pitman, and Sarah Zwinklis.

Radio Happening explores the powerful role that radio has played in advancing artistic risk taking, innovation, and sharing classical music with wider audiences. This live concert event will be recorded for future broadcast on All Classical Portland.

The City Wears a Slouch Hat was composed in 1942 by John Cage in just under a week, after his original vision for the radio drama was deemed impossible to produce. Initially calling for only the use of “sound effects” as instruments, the original score is thought to be lost.

Instead Cage wrote, assembled, and rehearsed a more modest take in just four days, using tin cans, gongs, alarm bells, foghorns, and other unconventional instruments. This version premiered on the radio in Chicago on May 31, 1942, with a script by Kenneth Patchen.

Slouch Hat tells the tale of a man called ‘The Voice’ who wanders around an imaginary big city, encountering surreal circumstances and mysterious characters. The premiere broadcast received mixed reviews, and as a result Cage’s follow-up projects were cancelled. Today, the work, Cage, and Patchen are now considered pioneers of the American avant garde movement, and are credited with encouraging experimentation in music, technology, radio, and instrumentation.

45th Parallel Universe’s The Gemini Project is a collective that stems from two percussive brothers from other mothers. The mission of The Project is to periodically expand to include performing artists from around the world in order to push the boundaries of performance in the Pacific Northwest.

Louanne Moldovan is thrilled to participate in a 45th Parallel production, and to collaborate with the artistic team and talent of All Classical Portland. Louanne is Artistic Director of Cygnet Productions, the acclaimed ‘literary cabaret’ theater company founded in her former husband’s rare bookstore, David Morrison Books, over 25 years ago. With Cygnet, she produces and directs works derived from diverse forms of literature. The goal is to commingle talented artists – actors, writers, musicians, designers – nurturing the exchange of passionate theatrical ideas and producing socially conscious, politically relevant performance art with vibrant, provocative results. She won the Oregon Book Award in 2007 as co-author of a play about the Algonquin Round Table writers.

Most recently, Louanne launched a weekly podcast, The Actor’s Nightmare, where as Host she featured terrifying, hilarious stories from the stage, told by the actors who lived through them. After two successful seasons, during the pandemic, Louanne segued to the Cygnet Radio Hour (CRH), a monthly presentation of great plays, poetry, and fiction to audiences hungry for the live theatre experience. CRH was voted among the Top 3 entertainments of 2021 by Oregon ArtsWatch. All episodes in both podcasts are free to listen and share.

Originally from San Francisco, Louanne spent nearly two decades in Los Angeles, where, among other things, she performed in theater film and television; was part of a comedy improv group as well as Second City’s Monday Nite Show; led theater workshops with psychiatric patients for The Imagination Workshop, worked at 20th Century Fox, and was a member of the prestigious Women’s Writing Project at the Los Angeles Theater Center (LATC).

45th Parallel Universe is a collective of musicians who come together to celebrate great chamber music with intimate artistic experiences. Since 2009, the organization has happily demolished distinctions between old and new chamber music, bluegrass and jazz, fiddle and folk. By bringing fragmented audiences together, 45th Parallel Universe reflects Portland’s surging creative communities in fresh and imaginative ways.