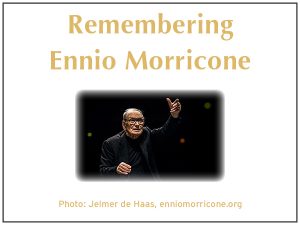 It is with great sadness we mark the passing of one of the greatest contemporary composers, known in film circles simply as Il Maestro (The Master), Ennio Morricone.

In recognition of Il Maestro’s passing on July 6, 2020, and in celebration of his beautiful music and extraordinary legacy, Edmund Stone will host two special tribute episodes of The Score this weekend honoring the legendary Ennio Morricone.

Morricone’s music has graced more than 500 films, he wrote 100 concerts and inspired untold millions of listeners. He has been nominated 91 times for industry awards, winning 82, including an Academy Award for Best Achievement in Music for The Hateful Eight, Original Score, and an Honorary Oscar “For his magnificent and multifaceted contributions to the art of film music”. His music touched our hearts, minds, and souls, and it is there that it shall live on.

Music, then Movie
Ennio Morricone was a brilliant, intuitive composer. He would frequently compose a score to a film based on the script, before ever seeing a single frame of the movie. Collaborating directors such as Sergio Leone, his old school friend, would shoot their “spaghetti westerns” around Morricone’s finished music. The music was played on the set and Leone would time the movements of the actors and the camera to the music, letting the music inform their performance.

Morricone and Mozart
There was an emotion and a craft to his music, it “upped the game” of everybody involved in the production. He took his craft very seriously, managing every aspect of it. He wrote the music, orchestrated it, then conducted the original soundtrack himself. Everything you hear is pure Morricone, from start to finish. Mozart exercised that type of passion and control over his craft. They have more in common than you’d think.

Constantly Creative
He was initially known for his “spaghetti westerns”. He created the sound that is now synonymous with the genre yet every one of his more than 500 original scores is different from the other.

Edmund Stone’s Favorite Morricone Movie
My favorite Morricone movie is The Good, The Bad and The Ugly from 1966. The music budget was so small that he had to improvise with non-traditional music and sound effects such as a mouth harp, wordless soprano, barking dog, gunshots… This changed movie music. From that point on many other film composers followed his lead, and they still do.

Learn more about The Score with Edmund Stone at thescore.org.