Get to know these talented musicians on the All Classical Portland Arts Blog.

Listen to this episode on-demand in our Audio Archive until May 19, 2022.

Damien Geter composed An African American Requiem to highlight the atrocities of race relations in the United States. Commissioned by Portland’s Resonance Ensemble, Geter’s work is a major musical composition for full orchestra, symphonic choir, and a quartet of African American vocal soloists. This requiem in nineteen movements will honor the victims of past lynchings through hanging, and present-day lynchings by way of police violence.

On Saturday, May 7, 2022, All Classical Portland will present a bi-coastal broadcast of Damien Geter’s An African American Requiem. The live broadcast will begin at 5:50 PM PT (8:50 PM ET) on 89.9 FM in Portland, WQXR 105.9 FM in New York, and streaming worldwide via our live player.

The program will be hosted by WQXR’s Terrance McKnight and All Classical Portland’s Suzanne Nance. Learn more about this ground breaking broadcast. 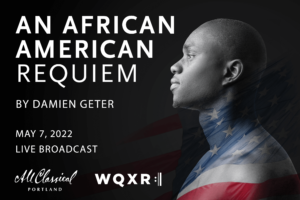