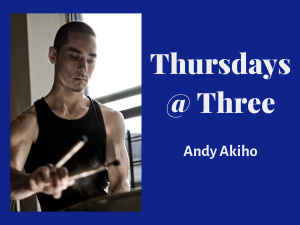 Although we are unable to open our studio doors to either a live audience or live musicians, we hope you will tune in to this week’s episode of Thursdays @ Three with percussionist Andy Akiho who recorded a few selections for you from his home! Join us this June 18 at 3pm.

Described as “trailblazing” (LA Times) and “an imaginative composer” (NY Times), Andy Akiho is a composer and performer of new music.

Akiho has been recognized with many prestigious awards and organizations including the Rome Prize, Lili Boulanger Memorial Prize, Harvard University Fromm Commission, Barlow Endowment, New Music USA, and Chamber Music America. Additionally, his compositions have been featured on PBS’s “News Hour with Jim Lehrer” and by organizations such as Bang on a Can, American Composers Forum, The Intimacy of Creativity in Hong Kong, and the Heidelberg Festival.
​
Akiho is also an active steel pannist and performs his compositions with various ensembles worldwide. He has performed his works with the Charlotte Symphony, South Carolina Philharmonic, Grand Rapids Symphony, Nu Decco Ensemble, LA Philharmonic’s Green Umbrella Series, the Berlin Philharmonic’s Scharoun Ensemble, Miyamoto is Black Enough, the International Drum Festival in Taiwan, and has had four concerts featuring his compositions at the Kennedy Center in Washington, DC. Akiho’s recordings No One To Know One (innova Recordings) and The War Below (National Sawdust Tracks) features brilliantly crafted compositions that pose intricate rhythms and exotic timbres inspired by his primary instrument, the steel pan.