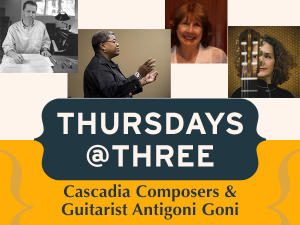 It’s a full virtual house on this week’s Thursdays @ Three!

Liz Nedela  grew up in Michigan on Lake Huron in a childhood filled with love of the outdoors, close family bonds, church, Girl Scouts, piano lessons, and the beach.  While raising her children, she earned degrees in piano, composition, English, education, and theater: BA, MMEd, MM. Her focus during the MMEd was on studio teaching of piano and composition, guided by studies in learning styles, music and the gifted and the at-risk student (which were sometimes one-in-the same), and a project to incorporate composition in the private piano studio and in summer camps.

Judy A. Rose has a B.S. and M.Ed from Portland State University. She worked for Portland Public Schools as a music teacher for 20 years. Judy has been an active music director, accompanist and singer in the Vancouver, WA/Portland Metro area. Judy enjoys playing the Native American Flute, birding, wildlife photography and spending time with her family. Judy & her spouse, share their home and creekside walks with Naomi, a rescued Cardigan Corgi & Chesapeake Retriever mix in Vancouver, WA. Photo credit: Nathan Howard/The Columbian.

Mark Kilstofte, whose music has been hailed as “exciting and beautiful, consistently gripping” (The San Francisco Chronicle), is admired as a composer of lyrical line, engaging harmony, strong, dramatic gesture and keen sensitivity to sound, shape and event. His music has been featured on NPR’s Performance Today and From the Top and performed by the Santa Fe Desert Chorale, New York Virtuoso Singers, New Amsterdam Singers, Dale Warland Singers and Petri Sångare.