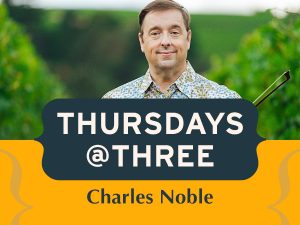 This week on Thursdays @ Three, we welcome back violinist Charles Noble.

Although we are unable to open our studio doors to either a live audience or live musicians, we hope you will tune in to this week’s episode of Thursdays @ Three with Charles as he recorded a few selections for you from his home!

Charles Noble has been the Assistant principal viola of the Oregon Symphony since 1995. Charles holds degrees from the University of Puget Sound, the University of Maryland, and the Peabody Institute at Johns Hopkins University, where his primary teachers were Joyce Ramée, Joseph de Pasquale, Michael Tree, and Roberto Díaz. Charles has won several prizes and awards, including the C.D. Jackson Award at the Tanglewood Music Center, the Israel Dorman Memorial Award at Peabody, and first prize at the Ladies Musical Club of Seattle Frances Walton Competition.

Outside of the Oregon Symphony, Charles plays with the Oregon Bach Festival orchestra (since 1996), and has performed in the Willamette Valley Chamber Music Festival since 2018. Other festival appearances include the 2015 Bang on a Can Marathon in New York City, and 2002, 2004, and 2006 International Viola Society annual Congresses.

Charles is also proud to announce the founding of Classical Currents, an online source for classical music concert information, interviews, and discussion.