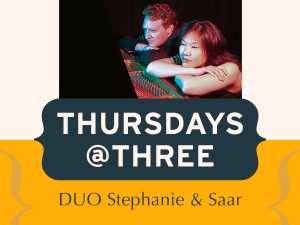 This week on Thursday’s @ Three, Christa Wessel welcomes pianists Stephanie Ho and Saar Ahuvia who collaborate as DUO Stephanie and Saar. Recent performances include their Lincoln Center debut with Igor Stravinsky’s Rite of Spring; collaboration with Philadelphia’s Orchestra 2001 in a complete performance of Frank Zappa’s The Yellow Shark and Symphony Space’s Wall to Wall Bernstein, a marathon celebration of Leonard Bernstein’s 100th anniversary.

About DUO Stephanie and Saar:

The duo’s 2017 recording of Johann Sebastian Bach’s The Art of Fugue has garnered tremendous praise; Stephanie and Saar toured The Art of Fugue extensively with stops in Portland, Sacramento, Phoenix, Baltimore, Philadelphia and New York, among others.

While pursuing graduate studies at the Peabody Institute of the Johns Hopkins University, Stephanie and Saar were inspired by Leon Fleisher to explore the Beethoven string quartets in a duo piano setting. The duo, who are married to each other, reside in New York City. Outdoor enthusiasts, they recently completed the 93-mile Wonderland Trail around Mount Rainier.