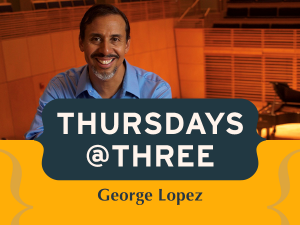 George Lopez has been a dynamic performer and educator for over 25 years. He is known on several continents for his thoughtful and deeply expressive performances of the standard repertoire as well as being a champion of newly-written works. He recently premiered a piano concerto composed especially for him and is comfortable in styles of music ranging from jazz and ragtime to more contemporary improvisational styles.

Lopez has given recitals and performed in chamber ensembles and with orchestras in the United States, Europe, and Australia. His interpretation of Bach’s Goldberg Variations at the Concertgebouw in Amsterdam received critical acclaim, and a Los Angeles Times critic hailed the pianist for his “…musical perspective, continuity, and kaleidoscopic colors.”