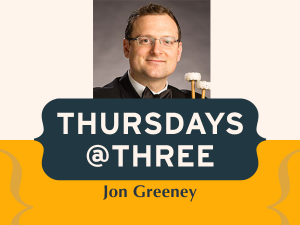 This week on Thursday’s @ Three, Christa Wessel welcomes Jon Greeney, principal timpanist of the Oregon Symphony. Jon is joined by friends from the 45th Parallel Universe among other special guests!

Jon Greeney has been principal timpanist of the Oregon Symphony since the autumn of 2010. He is also an adjunct professor of percussion studies at Portland State University. Jon holds a B.M. from the Peabody Conservatory, and an M.M. from Cleveland State University. His teachers at Peabody included percussion virtuosos Robert van Sice and Jonathan Haas, and at Cleveland State he studied with Tom Freer of the Cleveland Orchestra.

Jon has performed as an orchestral percussionist, timpanist, and chamber musician in numerous venues around the country, including Washington D.C.’s Kennedy Center and Carnegie Hall. In 2006, Jon won a position in the Orquesta Sinfónica de Xalapa in Veracruz, Mexico, where he performed as a full-time section percussionist until the summer of 2008. Since joining the Oregon Symphony, Jon and his family have resided happily in Portland Oregon.